The morning dawned bright and cheery over Bucas Grande. My parents, my sister, and I were awake early, excited to get on with the island hopping scheduled for the day.

The day’s activities were taken care of by our boatman and tour guide, Denden Tamayo. Expenses involved and contact details can be found in my budget and itinerary post. And here is our Day 01 story.

Before heading out to sea, we ate breakfast at a carenderia (hole-in-the-wall eatery) near the port. We also bought take-out food for lunch. It was one great breakfast for right outside was a beautiful view. Plus, Bucas Grande seemed so serene, we were really feeling the island life vibe. It was awesome to forget about stress for a while.

Just as we were finishing breakfast, Denden came to pick us up – his boat, he said, was waiting for us. That sounded so great! So, we quickly headed to where his small outrigger was docked.

When we came upon the boat, we were surprised when Denden and his assistant took out a long bamboo pole. His assistant, Dodong, stood on the boat holding one end of the pole while Denden stood on solid ground, holding the other end. We were then told to board and use the bamboo pole they were holding as railing. My family and I just stared at each other, not quite believing what is happening. I mean, it wasn’t that big of a thing, just some physics and safety issues, you know…

The two boatmen waited expectantly, so we went for it. My dad boarded first, then my sister. I stayed last so I can take a picture, of course 😀

Then we were off island hopping! The weather was perfect and the day just got better and better!

These are some of the beautiful and totally relaxing sights we saw, plus some of my favorite quotes. Ahhh, how I love nature and travel. 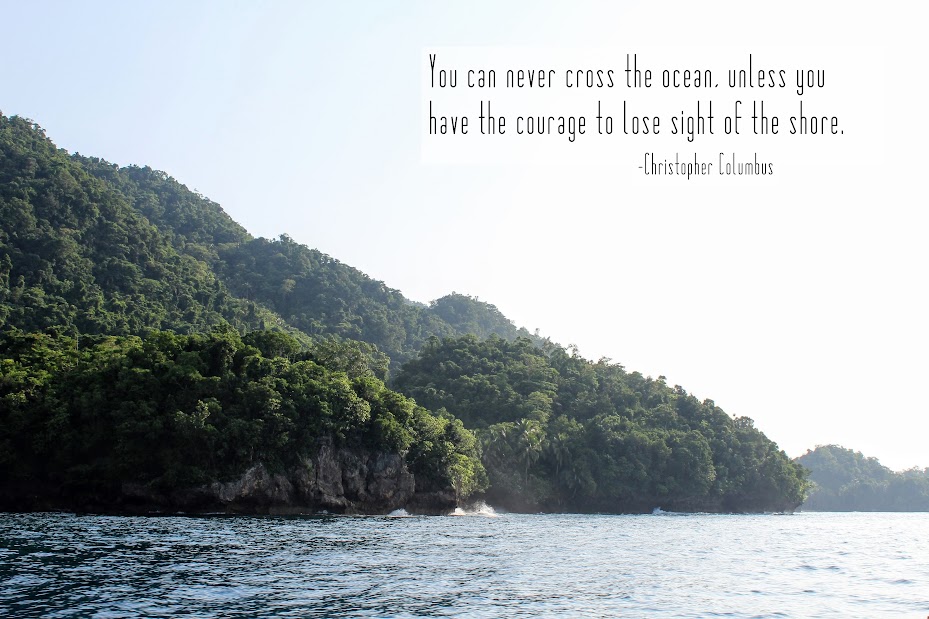 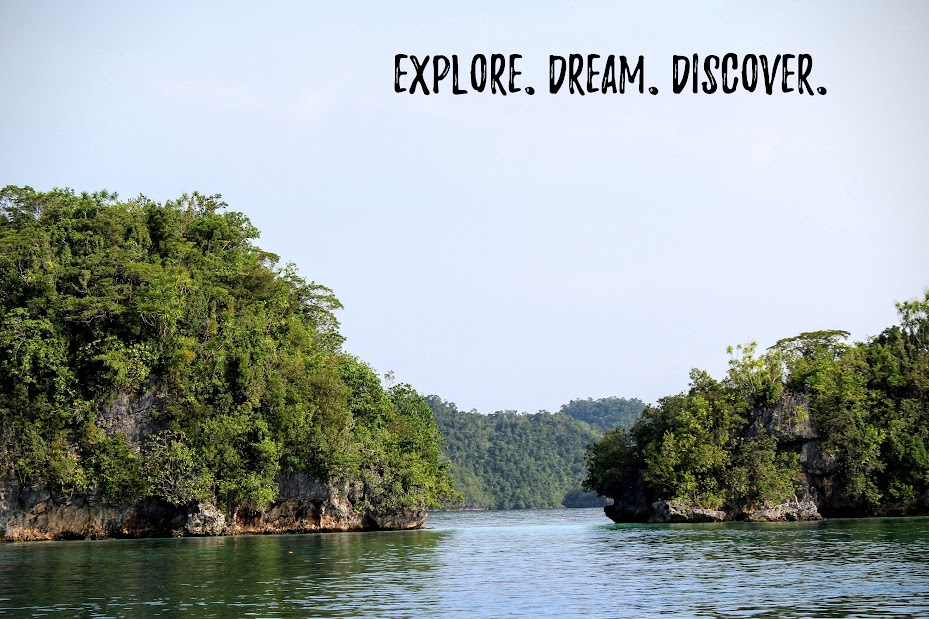 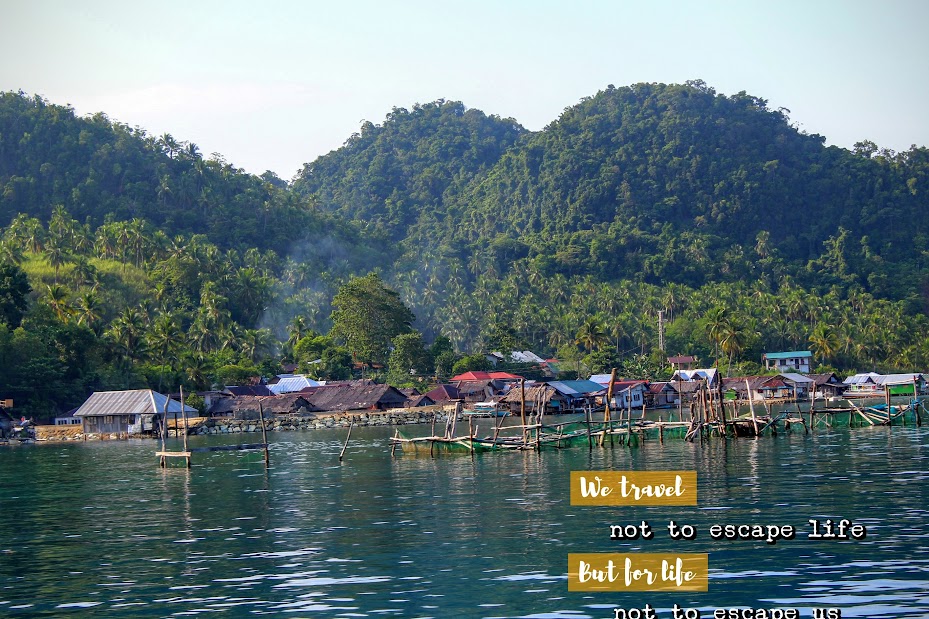 Our first stop was this tranquil lake, also called Lagoon Tiktikan, shrouded in mystery. Upon arrival, there was just this small hut and off to the right side was a two-story viewing deck. On the left side was a winding staircase partially hidden by the trees and bushes. 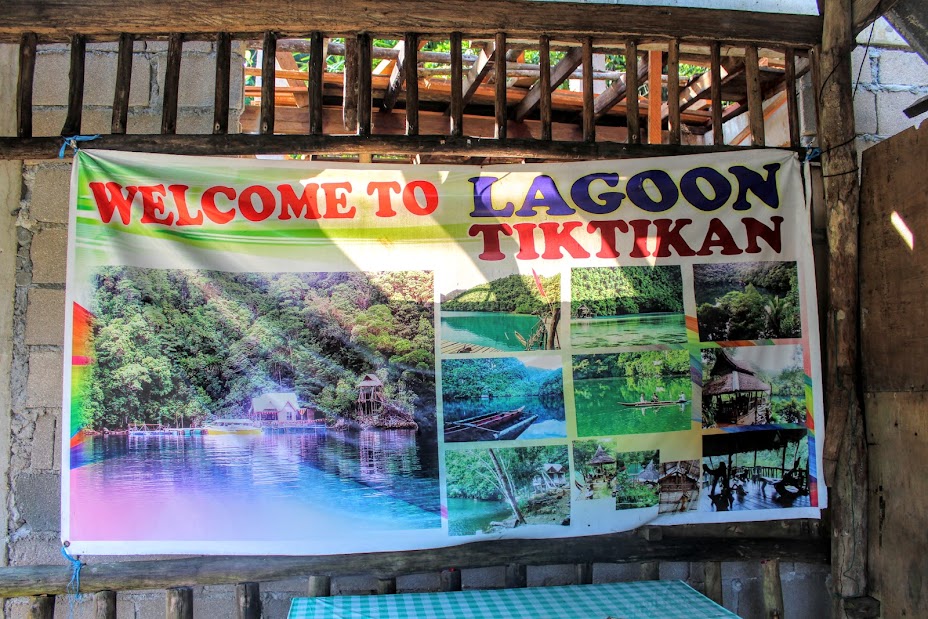 To get to the lake, one has to climb up those stairs, so we did. It wound through lots of tropical trees, which provided a nice, cool cover from the heat. Along the way, expect to find a weird bird statue. My parents and sister went ahead on the path, while I hung back and took my time taking pics and enjoying the winding path. Then I realized I was alone on the stairs trail, and since I kind of had an inkling what Tiktikan means, it felt kind of scary haha.

So why scary? Well, “tiktik” is the Cebuano word for a shapeshifting monster appearing quite often in Filipino folklore. My grandmother used to tell us stories about it when we were kids and wanted ghost stories. The monster is also known as aswang, and is quite scary and malevolent. So yeah, I was alone on the path, I just saw that weird bird statue, and those childhood monster stories stupidly chose that time to resurface in my memory. I climbed the stairs faster. 😀

Mythical monsters were momentarily forgotten, however, when I reached the top. Sprawled out in front of me was the lagoon, calm and beautiful. The sun was shining brightly and I felt relaxed. I had lots of fun taking pics there, even of the weirder statues inside the hut that can be found near the lagoon. I never did find out why it is called the way it is; there was no one there to explain.

After thoroughly enjoying Tiktikan Lake, we decided to go down again to where the boat was waiting. But our adventure in Tiktikan Lake wasn’t over it. We had to jump off the view deck!

Fear is Temporary. Regret is Forever

Yes, folks, that view deck I mentioned a while ago also serves as a diving board for the daring. This is the start of us conquering several fears in Bucas Grande!

Mom and Sis are scared of heights. I’m scared of deep waters (well not so much now after I took that scuba diving discovery challenge). My mom, my sister, and I don’t know how to swim. What my dad is scared of, I’m not too sure about since he’s tight-lipped. In any case, I declared that nobody is leaving Tiktikan Lake unless we all jumped off the view deck. I don’t know why I did that though, must be the heady fresh air  haha.

Since I made the call, then I had to go first. I climbed the first level, looked down, hmmm okay seems doable. Wasn’t too scared of drowning too since I was wearing a life jacket. Went to the second level and looked down. Went to the edge of the platform. My knees started shaking haha. Father was behind me and was smirking. He did not say anything but I couldn’t chicken out now, I have to prove something, I don’t know what exactly. Again, must be the fresh air. 😀 Seriously though, fear is temporary but regret is forever.

I went closer to the edge, then even closer that my toes were now peeking over the platform’s edge. I looked down. I am now around 10-12 feet (3+ meters) from the water. I know, it is not that high. But the water was green and calm… and deep, oh so deep. Before the fear could take full hold, I jumped! I was supposed to straighten my body for a more graceful fall. Body didn’t cooperate, however, so I landed on the water with my butt. Paaaiiiiinnnfuuuuul!

But it was super exhilarating too, the adrenaline rush was sooo worth it!

After that, time to egg on my sister and mother 😀 They managed to jump from the first level only. Such wusses! haha peace Ma and Sis! :p In fairness to my mother, she’s really scared of heights but she jumped, so proud of her! Then, it was my father’s turn. He went to the second level, ran towards the edge, and jumped like a boss. Color me impressed! Personality wise, I think I take after my father more.

By the way, while all of these were happening, our boatman Denden was charged to take pictures of us jumping from the view deck. After all four of us made the plunge, I reviewed the photos. I was nowhere in sight! He wasn’t able to photograph me – unacceptable! So, of course, I had to jump for the second time. I hesitated less this time for I was actually enjoying it. Still landed on my butt though, must really work on my form. smh. 😀 Fortunately, photos were successfully taken this time, and they’re really important because I run a travel blog, after all. 🙂

The surprising part was that Mama decided to jump again too! Still from the first level, but the fact that she’s 50+ and super scared of heights (she gets the shakes just looking down from a house’s second-level balcony), makes it awesome. Way to go mother!

We left Tiktikan Lake afterwards to continue with our island hopping. The next stop was Crystal Cave, which I will talk about in my next post, so stay tuned!